It’s fall and normally I enjoy the season. This week I keep thinking about how everything is dying. How once again winter is coming. My flowers are all dead or dying. Sigh. I’m going to try and think postively in this post. There is a hopeful side to fall. Once winter is done I’ll get to replant.

And yes I did this myself to prove my point. 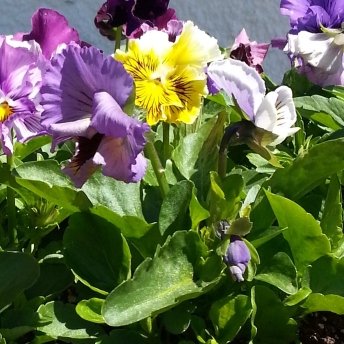 Picking out all the flowers at the greenhouse. Designing my planters, picking a theme for the year, and choosing where to place them in the yard. It’s one of my favorite parts of spring. It makes me think about God’s creativity. God is endlessly creative. Where He sees open windows we tend to see the paint job of a closed door.

Like those dead flowers that I used to make a picture God can use us in ways we would have never thought possible before. He uses those that the world thinks of as weak to prove His power. Since it’s Him in us that makes Christians powerful.

I have a story from my own life to prove my point. Growing up I had a hard time learning to read. Until I was twelve years old I was about two grade levels behind in my reading. My school tried multiple programs to get my skills up. They spent extra time with me in class, making sure a teacher’s aid was available. Nothing worked until they found out that it was my eyes that were the real problem. My eye muscles were underdeveloped. It took a specialist, many nights of doing exercises with Mom, and hours of reading to be able to read at my grade level.  Then I fell in love with books.

God works in mysterious ways. I’m one of the few people I know that have been called both stupid and smart. I see this as a gift. I empathize with people because I have experienced both extremes. For anyone that complains about being called a ‘nerd’, trust me it’s better than being called a ‘retard’. At least they think that you are going to amount to something someday.

Speaking of being something. I feel like God called me to write. Me, the retard in fourth grade. The woman with a learning disability. The one who needs a calculator to get the right answer.

And if you allow God in, He can work his magic on you too.